The Common Libraries initiative was established to ‘prototype the library of the future – today’ – to explore, develop and test new ways of working with library users, to support innovation and the evolution of library services, and expand our knowledge or information commons.

Accordingly, we conducted a ‘National Library Science Experiment’ and supported x5 ‘Hack the Library’ days to better understand the potential for Common Libraries to enhance the appeal, resilience and sustainability of libraries in future, before presenting our work at two national events for further discussion, with funding from Arts Council England.

Today, we’re delighted to publish the findings from our recent activities working with library authorities around the country.

Our ‘National Library Science Experiment’ successfully demonstrated the resonance of the Common Libraries message with a cohort of public library personnel – with 20% of library authorities in England expressing initial interest and 10% actively participating.

Maker Instruction Set loans proved of interest in places as diverse as Newcastle, Northamptonshire and the City of London. And, we were particularly pleased to learn that, in the London Borough of Barking and Dagenham, staff opted to use the Baking Macaroons Instruction Set in a group setting and, as a result, a library user stepped forward and now runs a fortnightly ‘We Can Make Club’; so far, those involved have made lava lamps, planted seeds and, even, made a bird house!

We’d hoped to see better sales figures for those Maker Kits that were ‘Made in the Waiting Room’. But, we were heartened to learn that staff in South Tyneside prototyped 7 Maker Kits of their own (Keith Dickenson’s Sand Garden, Susan Inskip’s Greetings Card, Angela Boyack’s Beading, Cheryl Bradley’s Salt Dough -‘Singing Hinnies’, and Tracey Watson’s Bath Bomb), sold x5 at their South Tyneside – Hack the Library Day, and plan to work with Tyneside & Northumberland MIND to develop more to improve mental health outcomes for library users in future.

In supporting x5 programme participants to organise a ‘Hack the Library’ day, we sought to test interest in each locale in establishing Common Libraries, as well as the effectiveness of different approaches to brokering relationships between libraries, hackers, makers and creative communities. We worked with them to deploy Resources developed during Phase I and, in particular, to adapt the Maker Thursday event format successfully deployed at the Waiting Room in Colchester. The events underlined the significant scope for libraries to anchor ‘skills sharing’ opportunities in future. They also pointed toward the potential for staff and user-generated content to flow from programmes of structured events and group activities over time, which when cross-referenced with the findings of our ‘National Library Science Experiment’, would appear to indicate that Common Libraries could be established and grow around the country in future. However, we believe a greater emphasis upon engaging a core group of people with whom to co-produce makerspace facilities and Common Libraries is needed in future, as per the work of Cultural Community Solutions to support the establishment of Creative Workspaces in London, if libraries are to move beyond event management for existing library users towards an approach which truly integrates hacking and making, knowledge/skills sharing and community publishing.

We organised two national events to introduce Common Libraries to library leaders around the country. Here’s what Kate Smyth (Library Development Officer, Oldham Libraries) had to say about our Newcastle event, shortly before the launch of Hack Oldham:

“The Maker Space event in Newcastle was really useful for Oldham Library Service. We are establishing a maker space within our Central Library and are partners with Hack Oldham, the local hack space. Visiting the Newcastle MakerSpace and finding out more about The Waiting Room was great and has certainly informed our plans. Oldham has embraced the Common Libraries project and are building our own instruction sets provided by the local community. The Common Libraries project, coupled with our maker space plans, will see Oldham Libraries adapt and evolve. The ideas have proved popular with our community and fit in with our corporate values of working with a resident focus.”

In total, 50 people registered to attend our national events, and a series of vox pops captures participants’ learning from the day, together with their thoughts about possible next steps – as per this short film featuring Joanne Moulton (Library Service Development Manager, LB Lewisham):

You can also watch an overview of the ideas that were discussed at the events which highlights understanding of as well as interest in the scope for libraries to encourage contributions of knowledge and know-how from library users going forward:

So, what’s next? We’ve summarised the key findings from our recent work with library authorities in the Common Libraries: Phase II – Project Report, and made recommendations based upon the lessons learned and feedback received (for which – thank you – everyone!).

We are eager to extend our prototyping activities. In particular, we are proactively seeking to explore, develop and/or test new services underpinned by emergent technologies with library services across the UK. As such, we hope interested parties will contact us to discuss how they might become one of our trailblazers. We also want libraries to become more self-sustaining so that they are capable of adapting and innovating in the face of declining revenue budgets. Accordingly, any project library service providers opt to pursue with us will build upon the work, to date, of the Common Libraries initiative, and seek to evolve library services through greater involvement of library users in service provision, as well as modernising the way in which local people interact with their local libraries. Crucially, we believe these changes will help mitigate against projected budget reductions by growing appeal amongst new audiences. Ultimately, our aim is to establish Common Libraries as an independent social enterprise in which local authorities and other relevant bodies have a formal governance stake. That way, all concerned will benefit from closer working to nurture innovation, replication and agile iteration, and be well-placed to attract funds and social investment to further support the evolution of public libraries in future.

On November 8th 2014, TEDxBrum hosted a day of DIY, a day of action, a day of change – and, we were thrilled to be invited to speak at the Library of Birmingham alongside so many great speakers about the origins of our work, activities to date and why it is we’re passionate about supporting libraries to evolve.

Last year, we joined Edgeryders at the UnMonastery in Matera for #LOTE3 and began talking about the scope to establish Common Libraries with hackers and makers across the EU. Twelve months later and we’re back from #LOTE4, where we led a dedicated workshop to talk about the progress we’ve made in the interim.

The workshop covered the initiative’s origins, current focus as well as our forward plans. We asked participants to comment on the build methodology and MakerKits we’ve developed for Phase II activities in the UK. We also explored appropriate licensing regimes for Common Libraries content, and talked about the ambitious tech prototyping projects we currently have under development with a number of local authorities. Crucially, we spent time with the Matera 2019 team talking about plans for Common Libraries in Basilicata – we’re absolutely thrilled they were successful and really look forward to being a part of the town’s cultural journey over the years ahead. A massive thank you to all the Edgeryders, UnMonasterians and terrific hosts at the Fra i Sassi for (another) inspiring time enjoyed and well-spent ‘Living on the Edge’!

Earlier this year, we joined the OuiShare Fest in Paris to learn more about the collaborative economy. We were thrilled to be invited as finalists in the OuiShare Awards – with 127 entries from 31 countries, competition was certainly intense – and totally blown away when Common Libraries was voted one of five winners! 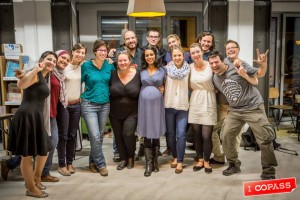 We’ve since benefited from an intensive 5-day accelerator programme organised by the terrifically supportive OuiShare team. During a packed week in Paris, we worked closely with sharing economy entrepreneurs from Copass, Guerrilla Translation, Sofa Concerts and Symba. We quizzed some outstanding mentors to help shape our forward plans, participated in broad-ranging workshops to learn more about collaborative governance and community development, and even spoke to Parisian business students about our MakerKit prototyping work. We’re incredibly grateful to the OuiShare community for organising such an enriching learning experience – and, look forward to collaborating over the months ahead.

The Common Libraries team had a busy summer…

They went along to the Festival of Stuff hosted by UCL’s Institute of Making – eager to meet Mark Miodownik and the ‘community workshop‘ crew. They launched their first Project Report and talked to William Sieghart about the scope for closer working between libraries and hackers / makers to contribute to the independent report he’s been tasked with preparing for DCMS and DCLG about the Public Library service in England. They contributed to SCL regional meetings in the South East, East and London to answer library leaders’ questions about Common Libraries and library enterprises. They joined the OK Cast in Berlin for the Open Knowledge Festival to explore the scope for Common Libraries to blaze a trail in the course of promoting community publishing.

They led a workshop at the Pi and Mash unconference for library and information professionals at UCL, went Off Grid to spread the word in the South West, then, made for Berlin again to explore the potential for Common Libraries to be established as Open Coops and make use of the forthcoming Peer Production License. They met with the good people of the Restart Project at the Indie Tech Summit in Brighton, were thrilled to be invited to join the Matera 2019 bid to become EU Capital of Culture, and began talking to Frysklab about the scope for collaboration around mobile common libraries in future.

More recently, they’ve been talking to open data proponents in Sheffield and the North West, and were even fortunate enough to catch up with Nick Stopforth along the way – before winding up, last weekend, with library enthusiasts at LibraryCamp in Newcastle.

Well, we’re pretty stoked to announce that Arts Council England has very kindly agreed to support the Common Libraries initiative to continue working with library leaders who are interested in hacking, making and community publishing – further details will follow this Autumn but enquiries from interested parties are, as ever, very welcome. Here at Common Futures, we look forward to Building Common Libraries with you all over the coming months!